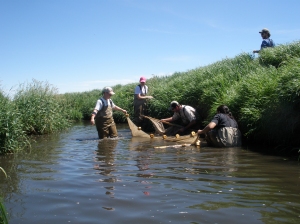 “The Blushing Fish,” an essay about an endangered Midwestern minnow, appears in the 2012 edition of The Briar Cliff Review, now in print. An excerpt…

A teeming mass of silver rises from brown water. Margaret, who has spiky blonde hair and tattoos on her arms, says, “That’s a lot of minnows!” There are hundreds: creek chubs, sand shiners, fathead minnows, as well as Johnny darters and sticklebacks. To me, they all look the same – a pile of two-inch silver and black fish, but there can be dozens of species in a prairie river like this. Pat can identify every fish we might find here, and, from years of practice, he sees the differences between them far more easily than I do. He and Margaret and the students, though, are really just interested in one kind of fish.

“So,” says Pat, as the group starts combing by hand through the wet ball of life in the net, “red fins, that’s what to look for.”

“First one to find one gets Marisa’s second Reese’s cup,” says another of the students, Bryan Giordano. Bryan’s hat has a trout fly hooked through the fabric, and his face has a close-cropped goatee of a color not unlike the dun of his waders.  He is thin, energetic, and often smiling. Marisa Stachowski, also a student, had previously offered a Reese’s to the first one to fall in the river. She smirks. Marisa is tall, with long straight brown hair cinched into a ponytail under a bright Pepto pink baseball hat – the only flash of color in the whole scene.

“I’ll buy that person a beer,” Pat says, upping the ante in the search for the Topeka shiner.

Adam read an excerpt at the issue launch event on May 9 in Sioux City, Iowa. To order your copy of the journal (it’s beautiful, the writing, the art, and the graphic design–and I’m not just saying that because they published me), visit this website. The current issue isn’t up yet, but it is available in print.

Published by Adam A

View all posts by Adam A

This site uses Akismet to reduce spam. Learn how your comment data is processed.

Adam is a nonfiction writer focusing on landscape, nature, the environment, science, place, and raising kids to love the outdoors.

He is also a practicing landscape architect. He has won awards for both his writing and design and has published widely in design magazines. He currently works at the Minneapolis Park and Recreation Board.

What I Write About